August 2014 marked the centenary of one of the most notorious incidents of the First World War, the destruction of the University of Leuven (Louvain) Library on the night of 25 August 1914. 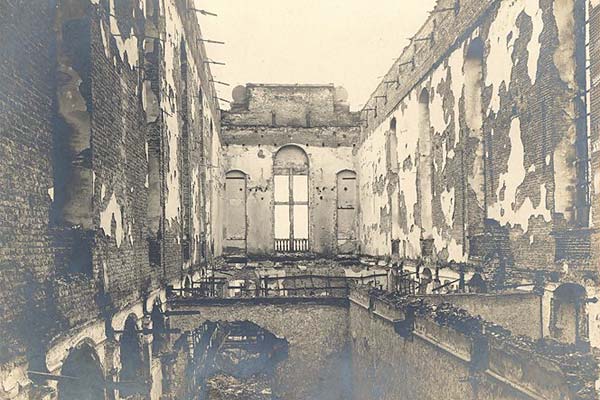 The University of Leuven Library following its destruction.

In the first few days of hostilities, German troops occupied and ravaged the historic Belgian city of Leuven. The university library was burnt to the ground; around three hundred thousand books and a thousand manuscripts were destroyed. This gross assault upon learning and culture caused world-wide indignation, and appeals were soon launched in Britain, the United States and elsewhere to make good the losses. 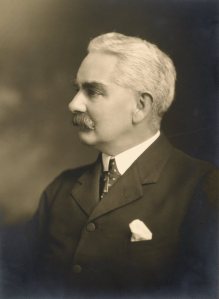 Henry Guppy, the visionary Librarian of the John Rylands Library, spearheaded the campaign to collect books for Leuven. He and the Library’s governors ‘wished to give some practical expression to their deep feelings of sympathy with the authorities of the University of Louvain, in the irreparable loss which they have suffered, through the barbarous destruction of the University buildings and the famous library.’

Guppy put out an appeal in the Bulletin of the John Rylands Library, ‘which met with an immediate and encouraging response from all classes of the community, not only in this country, but in many parts of the world’.

By the end of 1915 some 6,000 volumes had been collected or promised. Books continued to flood into the John Rylands Library, which acted as a clearing house for donations from individuals and institutions throughout Britain. The first consignment of books was sent over to Belgium in December 1919. When the appeal closed in 1925, 55,782 volumes had been donated.

Guppy was invited to the ceremonial laying of the foundation stone of the new library on 28 July 1921, which was built largely with American funding. He was assured by one of the professors: ‘You cannot fancy what it is to have been deprived of such an indespensible tool as a library, and then to see streaming in the choice and valuable books that make it possible for us to resume our work.’

As a token of thanks, in 1924 Guppy was presented with a few charred fragments of 13th-century manuscripts recovered from the ruins of the library. They stand as sad testimony to this act of wanton destruction.

Fragments of manuscripts from Louvain Library, presented to Henry Guppy, ‘the great Restorer of the Louvain University Library’, in 1924. Rylands Latin MS 447.

Sadly, Guppy’s and others’ efforts were in vain: the library was destroyed for a second time by German forces in 1940.

You can read more about this poignant story in an excellent article by David Atkinson in the Daily Telegraph online.

A digitised version of Henry Guppy’s account of the reconstruction of the Leuven Library, in the Bulletin of the John Rylands Library, is available to download at https://www.escholar.manchester.ac.uk/uk-ac-man-scw:17m1193.

This blog appears with the kind permission of John Hodgson.