This post is contributed by historian Dr Ali Clarke, a research fellow at the University of Otago, New Zealand.  Her most recent book ‘Otago: 150 Years of New Zealand’s First University‘ has just been published by Otago University Press and will be launched during the university’s 150th celebrations in March 2019.

The University of Otago takes pride in its status as New Zealand’s oldest university and has organised numerous events to celebrate its 150th anniversary in 2019. Establishing a university in Dunedin in 1869 was remarkably ambitious. It was the chief town of the Otago colony, begun just a couple of decades earlier by members of the Scottish Free Church. Gold rushes in the region in the 1860s led to an influx of people, but the population of Dunedin was still only around 15,000.

In response to a suggestion from the Otago high school rector, the New Zealand government appointed a select committee to investigate establishing scholarships to send promising young New Zealanders to universities in the United Kingdom; most people consulted believed a local university would be premature, or even ‘absurd’. Otago, headed by an entrepreneurial provincial council, decided to go ahead and set up a university anyway. It was no accident that it was in a community dominated by Scots that this happened: many Scottish migrants highly valued education and believed it should be offered widely. Furthermore, the Presbyterian Church was willing to fund a couple of professorial chairs.

After two years of preparation – in those days of slow boat transport, it took time for advertisements, applications and professors to travel between Europe and New Zealand – classes began in 1871. The 81 founding students came from around the country. It was a promising start, although many of the students were ill-prepared, without any secondary education. Other regions took note and wanted their own higher education facilities. In 1874, after much debate and negotiation, the University of Otago became a constituent college of a new University of New Zealand, which served as the country’s only degree-awarding body until the 1960s. It left all the teaching to its constituent colleges, established in the main centres of population; those colleges, including the University of Otago, became independent bodies in 1961.

Professor Ann Strong (right) with the staff of the Home Science Extension Service in the mid-1930s. They travelled around the region providing adult education courses. Faculty of Consumer and Applied Sciences records, MS-1517/064, S15-621E, Hocken Collections, University of Otago.

The University of Otago has been in some ways highly entrepreneurial. Within its first decade it had, as well as its arts and science courses, law classes, a medical school and a mining school; its dental school opened in 1907. Women were granted admission from the beginning, and in 1911 a home science school opened, attracting women from around the country. The university also attracted students from near and far to its health science courses; it added further health professional courses later in the 20th century. New campuses in Christchurch and Wellington helped cater for the needs of the expanding medical student roll. Commerce courses started in the 1910s, and Otago boasted New Zealand’s first MBA course in the 1970s.

But the university could also be deeply conservative. It was very slow to recognise the rights and interests of Māori. Although it attracted Māori students, especially to its medical courses, from the 1890s, it was not until the late 20th century that their numbers became significant. Otago was also the last of the New Zealand universities to introduce academic programmes in Māori studies, in the early 1980s. In its early decades almost all of Otago’s academic staff boasted degrees from distinguished old world universities and a remarkable number of Oxbridge graduates continued to be appointed throughout its history. There was much suspicion of American degrees: the first US graduate on staff was Ann Gilchrist Strong, who joined the home science school as a professor in 1921. 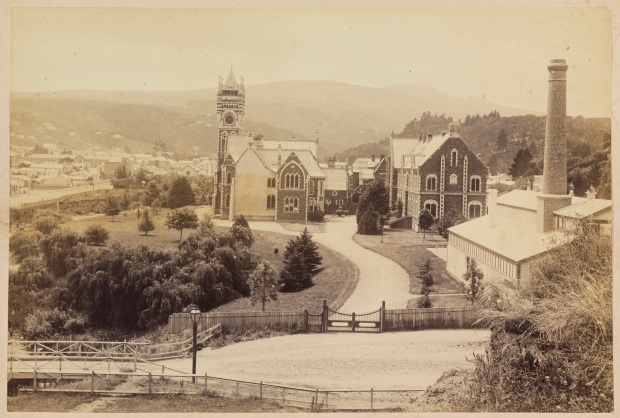 The biggest challenge in writing a new history to mark the University of Otago’s 150th anniversary was to turn a huge amount of material relating to a complex institution – it currently has campuses in four cities, over 20,000 students, 15 residential colleges and numerous research centres – into one readable volume. Previous histories, written for the jubilee and centenary, focussed on the administration of the organisation and its ‘great men’. The centenary history included a brief biography of every professor, past and present – that left little room for anyone else. The new book pays much more attention to students, and also tells the stories of early women staff and students and of the involvement of Māori with the university. The development of technology and the changing makeup of the student roll, including the rise of international students, also feature strongly. The book is arranged thematically, with about half devoted to the various academic and research programmes, and the remainder covering a diverse range of subjects, from administration and student life to changing teaching styles and the organisation’s built environment.

While I was working on the project I ran a blog, and found it a hugely valuable exercise – I thoroughly recommend it to anybody researching an institutional history (although it can be pretty time-consuming!). I posted regular stories on a wide range of topics relating to the university’s history. It was a good testing ground for material for the book – people corrected errors and provided further information, including identification of photographs. It also allowed me to share stories which, for reasons of space, couldn’t fit into the final book. The metrics were valuable in identifying areas people found most interesting. The blog was popular with the university’s communications and alumni staff, who are always on the lookout for interesting content. They publicised it widely and a couple of stories even made it to the local newspaper. This helped spark further interest in the project. Now the project is complete, the blog is being maintained by the Hocken Collections, the university’s research library, archive and gallery, using posts written by history students as part of their course work.  Otago: 150 Years of New Zealand’s First University will be launched during the university’s 150th celebrations in March 2019.