This post is contributed by Sarah Gallagher who is a Heritage Advisor for Heritage New Zealand Pouhere Taonga.  An alumna of the University of Otago, she has researched student flat names in Dunedin, New Zealand, since 2000.  Her book ‘Scarfie Flats of Dunedin’, co-written with Ian Chapman (Senior Lecturer in Performing Arts at the University of Otago), was published in 2019.  The book provides a selection of stories of named flats from the 1930s to the present, along with essays on group identity, street art, and student culture.

The University of Otago was established in 1869 and was the first university in New Zealand.  The university was planned and developed by Scots settlers while New Zealand was still a fledgling colony.  Dunedin was the country’s largest city and was booming thanks to the discovery of gold by Gabriel Reed in 1861.  A recent history by Dr Alison Clarke has been published about the University to celebrate Otago’s 150th anniversary in 2019.

While the University of Otago has an international reputation for teaching and research, it is also well known for its students, colloquially referred to as “Scarfies“.  As New Zealand’s only residential campus, it provides a singularly unique living experience in picturesque grounds amongst neo-Gothic buildings that sit alongside the Water of Leith.  Two area units surrounding and including the university campus are populated largely by young people between the ages of 15 and 25 years: in total 91% of the usual resident population.  The majority of the housing stock in these areas is Victorian and the character of the buildings, some of which are listed with Heritage New Zealand.  Many of the houses that students rent lie within Dunedin City Council heritage precincts and are considered character contributing houses; it is their character, as well as their proximity to campus that make these houses attractive to students. 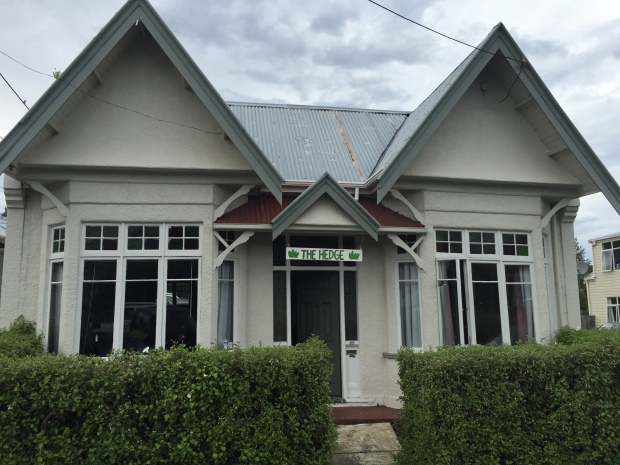 The combination of the residential campus environment, the fact that 80% of students attending Otago originate from outside of Dunedin, as well as their age and stage, provides a melting pot for interesting social activity.  Over the years, Otago students have experienced a number of traditions associated with living in halls of residence.  The Otago student experience until the 1990s is explored in Sam Elworthy’s book Ritual Song of Defiance: A Social History of Students at the University of Otago.  However house sharing, or flatting as we call it, has an interesting history of its own. 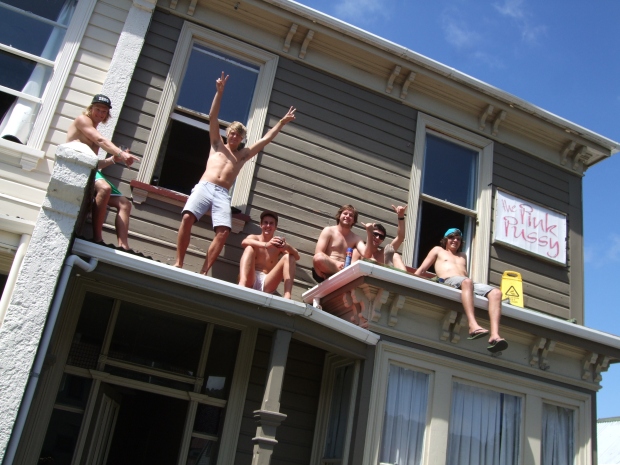 A particularly esoteric aspect of flatting history has been the focus of my research: the practice of students naming their flats.  This involves the conjuring of names and the creation of signs which are generally hung outside the house and are viewable from the street.  The practice has occurred since the 1930s and since the year 2000, over 700 named flats have been verified and mapped through the Dunedin Flat Names Project.

These flat signs are usually temporary residents in our visual landscape.  They can be in situ for decades or days.  In order to preserve this ephemeral print culture in North Dunedin and investigate their meaning, I began to record them.  Historical images of named student flats are often all that remains of a building that no longer exists and certainly records a piece of history that has not been recorded elsewhere.  They vary in form from simply being painted on the side of the house, to being spray painted on a couch residing on the verandah, to being constructed from a mind boggling variety of materials; these may include such items as cupboard doors, single bed heads, surfboards, skateboards, whiteboards, or beer crates.

The course of my research has involved photographing the flats with their signs, recording the details of the sign and its materials, mapping the addresses, and researching the background to the names which has involved the development of a taxonomy for the purpose of classification.  Names fall into a number of themes, the most prevalent make reference to the environment – the house, its grounds or often a playful reference to the street, and popular culture – often references to literature, film, music but also social political events.  Sexual themes are present as are references to alcohol but these do not factor as often. 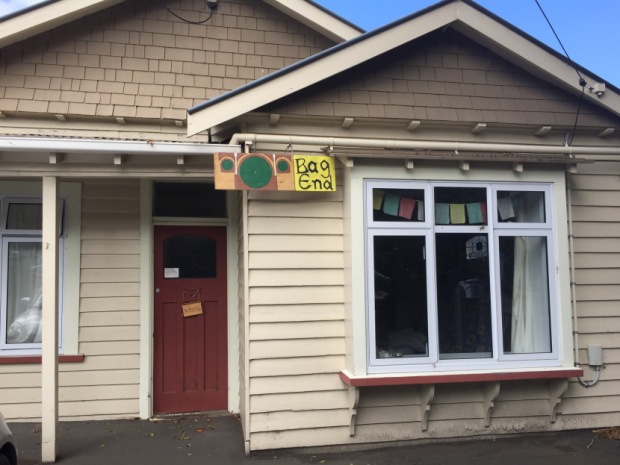 Names provide insight into what is important or meaningful to this population and are rich with character, imagery and playful linguistic devices.  Double entendre, puns, colloquialisms and vernacular language abound.  Occasionally the names are shocking and cause offence to members of the public, demonstrating a tension between the reader and the creator: a tension between a sign on a private house viewed from the public arena of the street.  Comparing the names and materials of the signs over time shows student behaviour and humour has not changed a great deal, for example, students were borrowing road signs and converting them in the 1980s as they continue to do today. 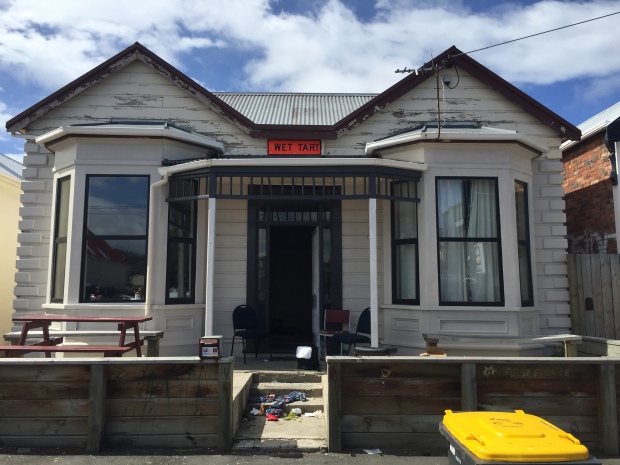 Why do students name their flats?  I believe it is about the creation of identity and sense of place.  As social animals, humans have a deep need to belong, and to create environments that meet these needs.  In a new town, starting a new life amongst new people, name provides an identity, a point of connection, and a locus of identification.  Students use the names as wayfinding devices – a name is easier to remember than a number, for example, “Are you going to the party at The Nunnery on Saturday?” and landlords have discovered that named flats are often desirable by students and rent earlier in the season than flats without names.  At a formative time in a young person’s life, their first home away from home is a memorable and important experience.  The naming of the place, no matter the reason or the name itself has meaning and importance.  The meaning can be so individual it can be lost on readers, or it can clearly demonstrate the musical taste of the residents, as in “Pink Flat the Door”, or it can reflect the history of the building, like a flat called “Legendairy” which was previously a convenience store, or dairy.  Named student flats add a colourful and edgy element to Dunedin’s visual landscape that when examined over time reveal stories about culture. 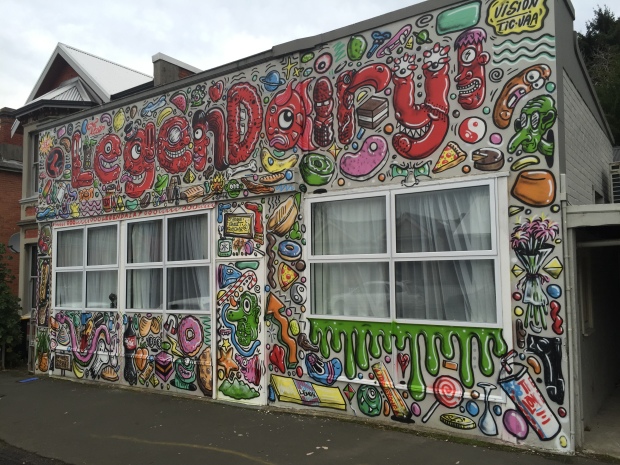