This post is contributed by Kai Green, the Anniversary Project Manager for the Nordic Summer University (NSU), a nomadic institution which meets every year in a series of winter and summer circles for interdisciplinary exchange.  In 2020, the Nordic Summer University is celebrating its 70th anniversary with arts/research projects investigating and inspired by NSU’s past, its archive in Copenhagen, and reflecting on its future as an institution.

Since 1950, the Nordic Summer University (NSU) has been an independent, democratic, academic institution, committed to cross-disciplinary research and critical thinking. Inspired by the 19th Century Danish public reformer N.F.S. Grundtvig – who developed a social philosophy of “people’s high schools” (folkehøjskole) – NSU was founded to express Nordic humanistic and educational values. The institution sought to cross disciplines, to flatten hierarchies by mixing established figures with young scholars, and to be both scientific and popular by expressing Grundtvig’s ideal that “the University must build bridges between the light of the scholars and the lives of the people” (højskolen skal bygge bromellem lyset hos de lærde og livet hos folket).

Keynotes over the years have included Slavoj Žižek, Martha Nussbaum, Karen Armstrong and Simon Critchley, but this is no ordinary conference!  Keynotes not only deliver lectures but live with and around the study circles during the week, joining discussions and switching over to become just another curious researcher among peers.  (Sound histories of our keynotes are being explored by one of our artists/researchers, Eduardo Abrantes.)

Despite 70 years of activities, NSU has always had the character of an experiment. Still today, members collectively create “study circles” to explore a theme with cross-disciplinary interest, meeting every winter in three-year cycles for a weekend conference and then (together with the eight or so other circles) at the heart of NSU: the week-long, immersive summer sessions, held in a different Nordic location every year.

Constant experimentation reflects the fact that NSU – as a fully democratic organisation, voting every summer on plans for the year ahead (in sometimes exhausting detail!) – has always morphed with the influences of the times.  Even with egalitarian credentials, a more elite grouping of academics ruled the roost in the 1950s and 1960s, with significant figures like Niels Bohr in attendance.  In the 1970s, Marxism became popular amongst many NSU members, leading the Danish newspapers and radio stations of the day to decry the “bloodless revolution” being enacted behind-the-schemes, claiming that children were being brought into a “radical experiment” of left-wing ideology.

They were right about one thing: children have always had a significant place at NSU’s summer sessions, allowing adult researchers with child-caring responsibility to be free to immerse in the debate, learning and cultural sharing.  Such decisions were powered by the long association of NSU with feminist theory and gender equality: the 1973 study circle “The specific character of women’s oppression under capitalism” (Kvindesituation & kvindebevægelse under kapitalismen) was the very first such investigation of the subject in a Nordic University (you can read more about the feminist histories of NSU in the work of another of our brilliant artists/researchers, Hild Borchgrevink). Still to this day, there is a specific ‘Children’s Circle’ supported by pedagogues during our summer sessions. 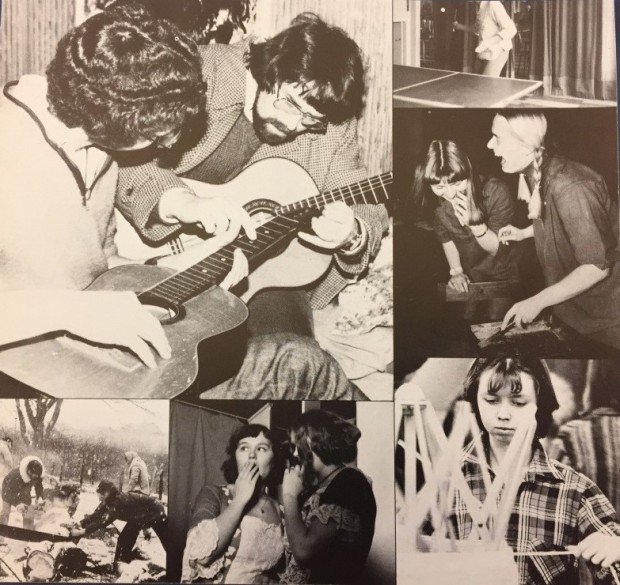 Throughout 2020, in collaboration with the Nordic Council, we are bursting open our history with a range of 10 arts/research projects – each taking departure in a theme of ‘Nordicness’ and producing films, essays, photos and blogs to trace the spirit of NSU across the world. We have projects finding the ‘spirit of NSU’ in:

The projects culminate in an Anniversary Celebration, during our Summer session, when we reach our 70th birthday.  If you’re interested in attending, please keep an eye on NSU’s website and social media.

Although Nordic countries have perhaps held out longer in the protection of their Universities from commercial impulses than their North American and British counterparts, the Nordics have not been immune from the efficiency-drives of Higher Education. Yet, even within Nordic countries, NSU’s emphasis on “salon-like”, trans-disciplinary and broadly-drawn seminars continues to be so rare. Being a nomadic institution, NSU has suffered more instability than most publicly-funded academic spaces, but has always fought-back against the chance of foreclosure.  The Nordic values of equality, democracy and openness bring a loyal following of academics from across the world.  But most exciting is the mix of longstanding and fresh members together.

Being nomadic, our history is not an easy one to collect and share. Run almost entirely on voluntary labour, NSU has not had the luxury of time to dwell on its history.  Yet, substantial effort has been rewarded: the Danish National Archives in Copenhagen now stores NSU’s extensive 70-year archive.  The next step, for an organisation that thrives on face-to-face dialogue, cocooned away from society for a brief while every winter and summer, is to make our archive alive so it can be fully engaged with.

I acknowledge and thank the authors of “Kritik og krise”, a publication from NSU Press (Gothenburg, 2000), which presents historical reflections from NSU’s past.  The full publication can be read (in Nordic languages) here.