This post is contributed by Dr Jonathan Swinton who has spent thirty years working in mathematical biology in academia and industry.  He is currently writing a textbook on mathematical phyllotaxis and has published several articles on Alan Turing’s pioneering work in this area.  In 2012, he designed the international citizen science project Turing’s Sunflowers with the Museum of Science and Industry in Manchester.  His book ‘Alan Turing’s Manchester’, a social history for a general audience, has recently been published by Infang Publishing.

The roles played by women in the mid twentieth century history of computing are currently in the spotlight.  The Hollywood film Hidden Figures tells the story of the largely female and African-American staff who provided numerical answers to NASA’s engineering problems. A recent book by the historian of technology Marie Hicks, Programmed Inequality, questioned how the British state post 1945 used female expertise in information processing. Hicks’ firm answer is in her subtitle: How Britain Discarded Women Technologists and Lost Its Edge in Computing and she makes good use of her sources, primarily in governmental computing, to support this. But much of the computing innovation was happening within universities, where gender roles in computing at the time have received relatively less attention. This blog post draws on my new book Alan Turing’s Manchester to highlight the careers of Bertha Swirles, Phyllis Lockett (Nicolson), Cicely Popplewell, Audrey Bates, and Mary Lee Woods and explore whether computing at the then Victoria University of Manchester did first create and then lose female expertise.

Manchester University electronic computing had an early success in 1948, when the Mark 1 ran its, and arguably the world’s, first computer program. One of the reasons this happened where it did was that wartime Manchester was already a national centre for mechanical computing. This approach solved problems from science and engineering by breaking them down into a large number of repetitive steps which did not require elite skill. Designing these algorithms was still the province of the mathematician, first practised in Manchester by Douglas Hartree who was Professor from 1929. He re-appointed an old friend from his Cambridge days, Bertha Swirles, as an Assistant Lecturer.  It was not unusual for women to serve in junior teaching positions in mathematics, but she was also active in research and collaborated with Hartree to solve problems in the new quantum physics by phrasing them as repeated tasks for the operator of a desk calculator. This required the computer – as the operator of the calculator was called – to obediently but precisely obey the demands of the algorithm in thousands of repeated actions per day. Hartree and Swirles’ first computer was Hartree’s father, but clearly this could not scale. When this approach was independently adopted in the US, it evolved into a the large-scale use of semi-professional female labour seen in Hidden Figures. (Swirles herself returned to Cambridge in 1938, where Girton College probably offered her more job security and a higher status role, and she spent the rest of her career there. The couple had no children, and she continued to publish for many decades and to take on senior roles in the University. It was via her husband that she acquired the title Lady Jefferies.). Manchester went in a different direction.

Hartree continued to develop mechanical computing in Manchester by importing the idea of the ‘differential analyser’ from the United States, and raising local sponsorship to build a production machine housed in the basement of Patrick Blackett’s physics department (a room unusable by that stage for physics experiments because of the Rutherford-era radiation). In the decade before 1948 Hartree’s group was a national resource for numerical solutions to the problems of the science war, including the British atomic bomb project. Rather like the Tardis, the differential analyser required simultaneous skilled operators for the most efficient use, and Hartree recruited a team of four. Unlike Swirles’ theoretical role, this was in part manual labour, perceived by at least one of the recruits as a male job because of the lubricating oil and overalls involved. But the competition for male mathematically skilled war-workers was very high and opportunity opened to Phyllis Lockett, a recent Manchester graduate. Her most valued contribution was remembered within the team not at the controls of the analyser but on problems it could not solve. When the team had to act as ‘human CPUs’, reverting to the desk calculators, she was the fastest. But it was her theoretical contributions that have lasted the longest; she went on to co-develop the Crank-Nicolson algorithm which is still in use today by (electronic) computers. It was so-called because Lockett had married, becoming Phyllis Nicolson, in 1942 and she then moved to Leeds by the time of the birth of her first child in 1947. She was appointed to a lectureship in Leeds in 1952 after her husband, who had previously held the post, died in an accident, and with a young family to care for she taught for several years but does not then seem to have been active in research.

The prewar construction of Hartree’s differential analyser had been by engineers under the direction of mathematicians, and this was the postwar model adopted when Blackett and Hartree imported talent and funding to Manchester to create the electronic computing era. The mathematician Max Newman was to create a Calculating Machine Laboratory and Freddie Williams was recruited largely because he could build the Machine for him. Williams rapidly handed responsibility to his student Kilburn and for decades there were no women in Kilburn’s engineering team except at low levels. The large number of repeated logic circuits had to be tediously checked by a ‘wireman’ and a sole ‘wirewoman’, Ida Fitzgerald, is remembered because of her gender uniqueness.

Newman famously recruited Alan Turing as his first appointment, but he or Turing also appointed Cicely Popplewell as Turing’s assistant. Popplewell was from the same Girton mathematics mould as Swirles, but her contributions were both theoretical and managerial. Her memories of Turing were not warm – she told Turing’s biographer he had barely recognised her right to exist – but she found a place for decades within the emerging computer service. She wrote the first versions of subroutines for mathematical functions like cosine. She rewrote sections of Turing’s programming manual to make it comprehensible; she edited proceedings and travelled abroad to give courses. Popplewell left a few pages of memories of early computing in which she emphasised the physical labour: the manually switched instructions, the sweltering heat, and the stairs that had to be constantly traversed to co-ordinate with and, sometimes, placate, the engineers.  Despite the extensive celebratory accounts of Manchester computing, she is not emphasised in its own historical record.  She is glancingly remembered as a manager and as a mother-figure within the service. She married and moved to Buxton around 1970 in her late 40s, and at around the same time she left the department, and computer science, with no recorded fanfare despite her long service.

Popplewell shared her 1949 office with Audrey Bates. Bates was like Lockett a Manchester mathematics graduate and she became an MSc student with Turing as her supervisor. She was recruited as part of Max Newman’s initial vision for the Laboratory, to use machines to do symbolic mathematics – what might now be considered a branch of artificial intelligence – rather than to do calculations.  Her MSc thesis was the sole output of Newman’s vision, and neither she nor anyone else followed it up as the mathematical purpose of the Laboratory was lost. But Bates rapidly converted the skills she had gained in using the Manchester computer into what became a lifelong career as a programmer and systems analyst.  She soon moved to the emerging programming group at Ferranti who were commercialising the machine, and where gender relations were profoundly different to those of the University. 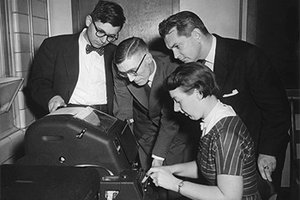 Audrey Bates, operating the world’s first remote computation session in 1955 (Copyright University of Toronto Archives).  Bates was Toronto’s expert on the Ferranti Mark I and her name is often found on the internet in association with this photograph, although sometimes incorrectly described as a ‘Canadian National telegraph operator’.

In the 1948 University, there was no in-principle barrier to female achievement: there was a (single) female Professor, there was no marriage ban as in the Civil Service, and there was no explicit pay discrimination. But in practice, no woman had access to creative engineering work, and women appeared in computing only from mathematical backgrounds and were as marginalised at least as much as the male mathematicians were. Swirles and Lockett both acquired academic positions elsewhere but neither as full Professors.  But Ferranti, the Manchester electrical firm contracted to commercialise the university Mark I, started from the ‘radio belt’ where working-class women, for whom Ferranti competed with the Lancashire mills, assembled components under the eye of technically qualified, better paid male supervisors. However, as Ferranti started to market the new machine, they needed software engineers to show users how they could exploit the technology. The managers at Ferranti inserted a pre-fab ‘tin hut’ into the Moston factory to house this emerging class of programmers. One of their early recruits was Bates. Within a couple of years Bates went to Toronto, where Ferranti had sold its second machine, and then on to a career as a systems analyst in the US that lasted into the 1970s. Another Ferranti recruit was Mary Lee Woods (later Berners-Lee). Woods discovered that she was being paid less than her male colleagues and scandalised Ferranti’s female manager of woman’s labour by successfully asking for equal pay. This would have been economically disastrous on the radio belt, and was institutionally impossible in a University which largely didn’t appoint women to the jobs at all. But in the tin hut, where computer programming was a brand-new activity, it was possible and indeed necessary.

How do these individual lives fit into Hicks’s thesis that women acquired expertise that Britain then lost? Women indeed had access to early Manchester computing through their roles, widely accepted as gender-suitable, as mathematicians. Those who preceded Kilburn’s era, Swirles and Lockett, remained within these roles and did not seek to become computing innovators, and were able to continue their careers, albeit in ways that were consistent with the contemporary choices between family and productivity. Popplewell moved into the mother-like role of the system administrator and contributed for decades, though her eventual departure hints at some unhappiness. Bates and Lee Woods both succeeded in becoming part of the first generation of computer programmers, but both did so away from Manchester University, and in Bates’ case, away from Britain altogether. Was Kilburn’s department a hostile environment for these skilled women? Accounting for these individual choices in terms of larger forces of gender, class and disciplinary boundaries will always be speculative, but the outcome was that Manchester University computing moved in a few years from a pioneer group of male and female (and indeed gay and straight) mathematicians and engineers, to one with much less visible diversity.

I particularly acknowledge Simon Lavington for his generous sharing of information (though he is no way responsible for my conclusions); his forthcoming book on the uses made of the Ferranti Mark I will be published by Springer in Autumn 2019. I am also indebted to other sources available on request and which can be found in my book Alan Turing’s Manchester, along with discussion of these and other women and men visible on the Manchester scene like Beatrice ‘Trixie’ Worsley and Dorothy Wrinch.